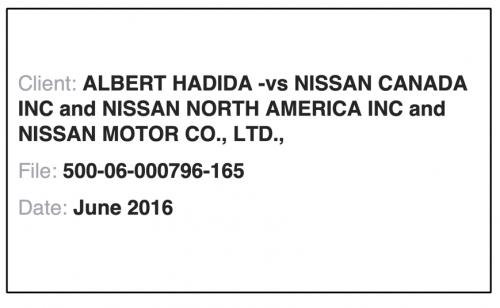 All consumers in Quebec, who, any time between May 8, 2006 to November 30, 2015, purchased and/or leased one or more of the Nissan Versa model years 2007-2012 recalled under Transport Canada Recall No. 2015402 manufactured, distributed, supplied, wholesaled and/or imported by Nissan.

The Plaintiff alleged that Nissan violated section 228 of Quebec’s Consumer Protection Act, by failing to inform consumers of the defects in the spring coils in Nissan Versa 2007-2012 models. Plaintiff further alleged that Nissan was negligent before, during and after the recall. Nissan always denied any wrongdoing and has agreed to settle the class action on a without prejudice or admission of any wrongdoing. A copy of the Settlement Agreement is available below.

b) Up to $115 in credit to be used in any Nissan dealership in Quebec – in the form of a Nissan gift card letter, which expires after 5 years (“Credit Payment”).

Class action authorized by the Superior Court of Quebec on January 24, 2019. The notices to Class Members were approved on February 23, 2021. The Settlement Approval Hearing will take place on March 25, 2021, at 9:15 a.m., via TEAMS or in a room to be determined of the Montreal courthouse. The date and time of the Settlement approval Hearing may be subject to adjournment by the Court without further publication notice to the Class Members, other than such notice which will be posted on this website and on the Settlement website www.springcoilsettlement.ca.